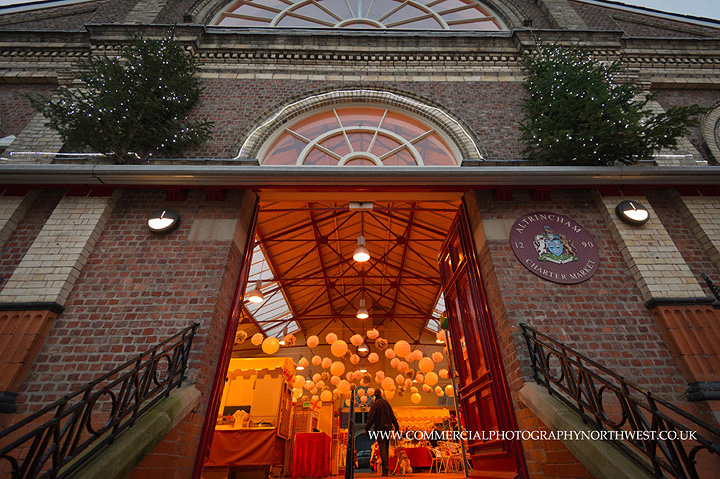 For the past few years I’ve been asked by the Altrincham Stamford Quarter to photograph the Lantern Parade and switching on of the Christmas lights.

Last year’s event still sticks in my mind as it was possibly the wettest day of the year!  By contrast, this year the day was mild and dry – in other words, perfect!  In the years I’ve covered the event I’ve seen it grow and grow, and this year was the busiest yet.

The lantern parade is a great community occasion, with local primary schools involved in making lanterns in the weeks building up to the great switch on.  A few days prior I’d visited St Vincent’s Primary School to watch the Year 3 class making the lanterns that would be lit and carried during the procession.  There were also lantern making workshops taking place in the Stamford Quarter all during the morning, so that things were already busy by the time that everybody started to assemble by Altrincham Market (the traditional starting point for the parade) as dusk began to fall.

Then, led by Captain Christmas and his band of revellers, the  parade marched to the Square in the Stamford Quarter for the official turning on of Altrincham’s Christmas lights.

In the main Square, as in previous years, there was a stage where entertainment for the crowd had been arranged.  As well as more songs by Captain Christmas and his band, there was dancing and songs from local youth groups, then the countdown and the switching on of the lights by none other than Father Christmas himself.

I took the opportunity to get a shot of the entire event from the top of the building overlooking the square, which shows you just how busy it was this year!

A glance around this blog will show the wide range of events that I cover, both indoor and outdoor.  If you have something planned and would like to discuss having it photographed, just get in touch for a chat.  Please either fill in the contact form at the top of the page or call me on 07766 815703.