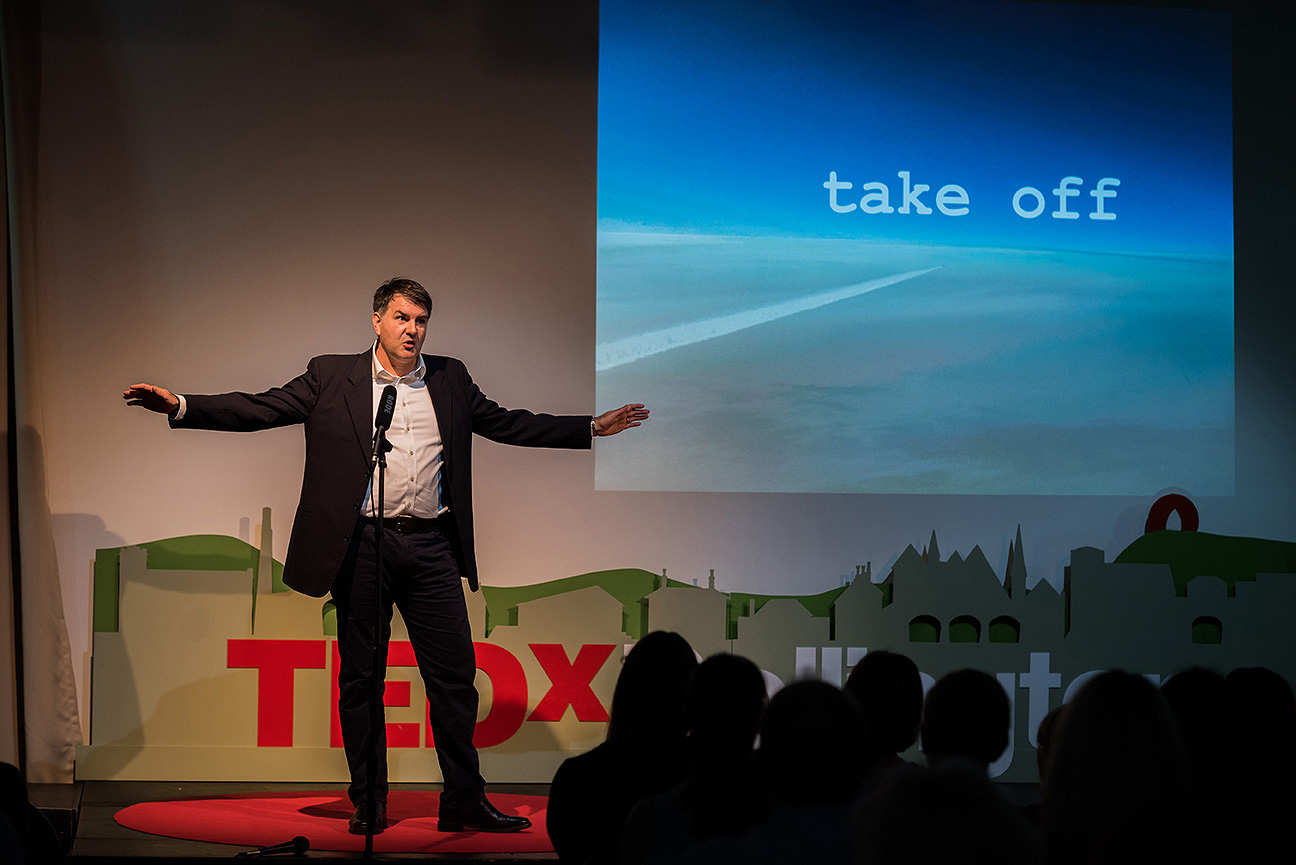 The TEDx talks came to Bollington a couple of weeks ago, and I was asked along to record the event by the organisers.  My job was two-fold.  Firstly, I was to create a record of the day’s events, and to create images that could be used for PR after the event and for marketing use for future similar events.

Many years ago, when I was just starting to shoot commercial photography, I received the best advice ever on photographing events: “Make it look busy, make everyone look happy”.  Fortunately, I had no need to try too hard with either of those things on this day.  The event had sold out weeks ago, and everybody was happy and excited all day long (though you could throw in a dash of nervous excitement for the eight speakers in the build up to starting their respective talks).  My brief was documentary coverage of the day, including portraits of all the speakers and backroom staff, which would be used to promote future events.  I also wanted to include some of the fantastic branding created for the event, including the programme of events, and the pop-up banner which greeted visitors on arrival, and which made a brilliant backdrop for portraits.  A big shout out to Visual Sense for their great design flair and hard work on creating such great visuals.

I shot far too many photos to include more than a tiny taster here.  I’ve not included ‘crowd’ shots, nor those showing the audience enjoying coffee and ice cream during the interval courtesy of local businesses Bean & Bubble and the Bollington Ice Cream Co,  both of whom definitely deserve a name check.  In this blog post I’ve focussed on the events onstage, and the promotional shots.  There’s one exception though – and it’s a phenomenom that has grown and grown over the years.  At the bottom of this post you’ll see a few shots I’ve taken of people (speakers, guests and backroom staff) taking selfies throughout the day.  I think every event I shoot these days includes a handful of shots like these.

In terms of the main point of the day – the talks – it was great to have the freedom to move about quite freely in the auditorium.  Like all TED events, the talks were videoed for putting on the world wide web, so I made sure that my moving around wouldn’t spoil the videographers’ shots, and I was of course careful not to be a distraction to either the speakers onstage or the audience listening.  But it was great to be able to move around and create such a wide range of shots from all different angles.  Part of the job of a professional photographer is to work within the constraints of the venue and occasion (sometimes it just isn’t possible, or right, to move around at all), but when you can it really opens up so many more creative possibilities.

Last word to the organiser Sara – “A massive thank you for providing fantastic photography at Bollington’s first TEDx event.  I really appreciated your professionalism and thoroughness in capturing the story of the event day so beautifully.”

There was an awful lot of this going on all day.

If there is anybody out there planning a speaking event (and it doesn’t have to be TEDx) and would like to discuss having it professionally photographed, I’d love to chat with you.  A set of professional photos of an event creates so many future possibilities: as a record of an event; as a reminder of the emotion of the day (thanks to so many of the participants who have said lovely things about how particular photos bring back memories of that bit of the day); to create PR about the event immediately afterwards; and as marketing material for future events.  You can get hold of me by phone, email or by filling in the contact form on this website.