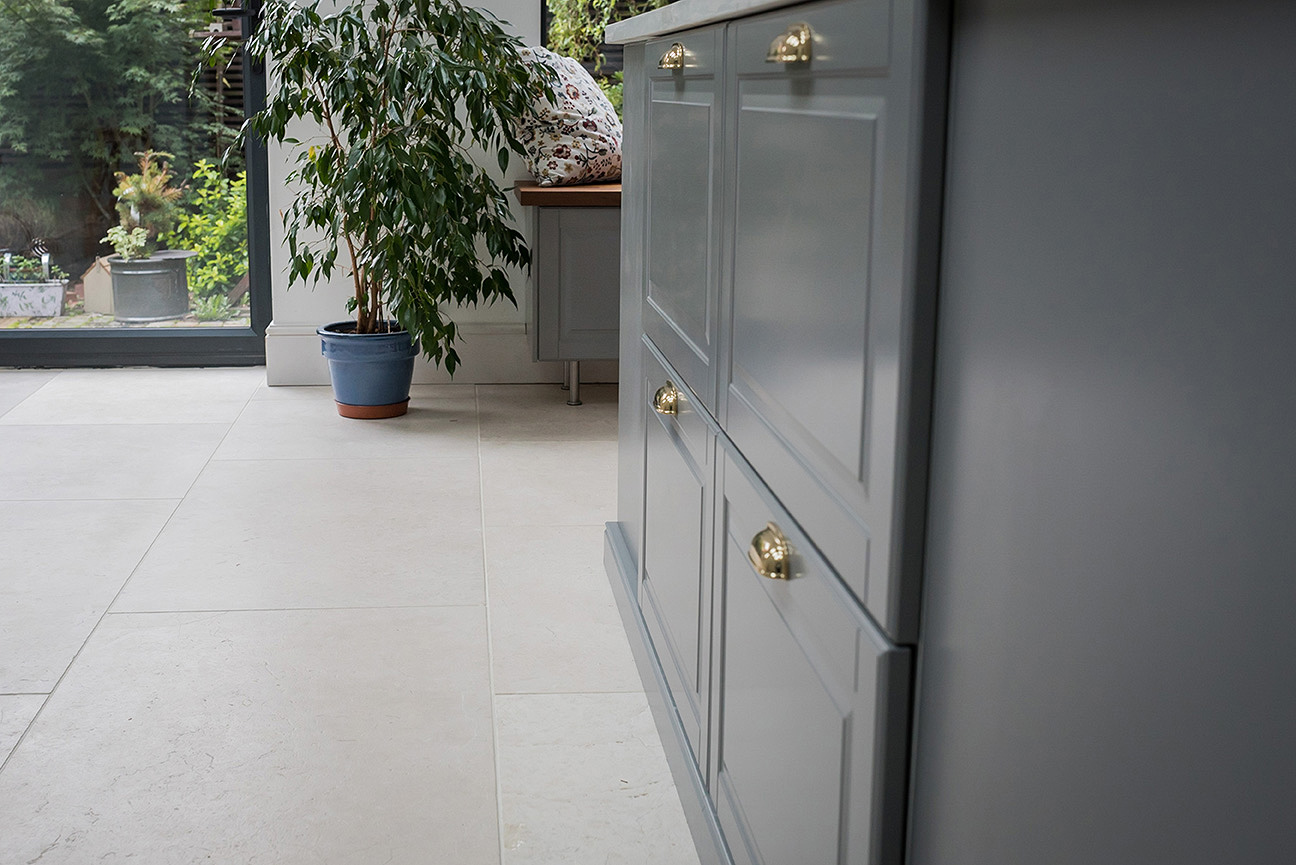 At first glance it’s interiors photography, but actually these photos were from a commercial advertising photography shoot.  Read on, and you’ll see the subtle differences.

This was an interesting shoot.  As I alluded to above, it wasn’t a straightforward ‘shoot the room, make it look big and pick out plenty of details’ interiors shoot.  I’d been commissioned by Stone Store (for whom I shoot product shots of their new flooring ranges) to visit some of their clients and create photos of the flooring installed in newly-fitted kitchens.  These photos were – and this is the crucial point – going to be used as part of a nationwide advertising campaign.  Which meant that, while I wanted to show some context to the shots (i.e. include the kitchen appliances, islands, etc), there needed to be a concentration on the floor.  As these would form adverts in various magazines and journals, it also meant leaving plenty of copy space for designers to include information, wording, logos, and whatever else their eye decided would make the ads stand out to the reader.  Hence, commercial interiors photos that differed slightly from the norm.

On a shoot like this I always work with what’s available.  Some people bring props, but I don’t believe in that approach.  I think you use what has been chosen by the person who’s living in the house and using the room.  In a kitchen that’s not really a problem.  There are appliances, shiny surfaces, and usually chairs, breakfast bars, etc. to provide points of interest in the photo.  So it was here – the galvanised watering can was just crying out to be used (and provided a lovely point of reference to the garden outside and floral cushion fabric too, tying the indoors and outdoors together), the stool just looked cool, and the potted plant – well, you can see it got moved around and used a lot!  It didn’t hurt that the blue pot balanced nicely with the shade of the units.

These photos have a sense of space that other interiors photos might not – because of that necessary room for designers to work their magic.  Having said that, they are also usable as product and lifestyle photos for the company.  They’d look great in a catalogue or on an Instagram feed wouldn’t they?  And offering that versatility is something I like to do for a client.

Nice to be out shooting on location, and shooting static objects rather than people for a change!  Of course, some lifestyle shots of the homeowner at work in the kitchen, or reading at the breakfast counter, would have also made great images …… perhaps next time?  (And, in case you’re interested, another of these shoots was blogged about here).

The point is, there’s always a story to be told with photos.  It’s always worth getting in touch for a discussion about your idea, and how I could realise it for you …. and add to it.